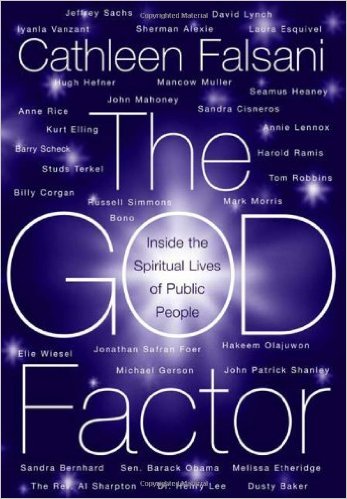 The God Factor: Inside the Spiritual Lives of Public People (Hardback, Signed by Author)

When religion reporter Cathleen Falsani climbed aboard Bono's tour bus, it was to interview the rock start about AIDS awareness. Instead, they plunged into a lively discussion about faith. "This is a defining moment for us," Bono said. "For the culture we live in."

Spirituality clearly now plays a key role in the United States. But what is also clear is that faith is a more complex issue than snapshots of the country convey. Jesus. Buddha. Kabbalah. Angels. This may be a nation of believers but not of one belief--of many. To shape a candid picture of modern faith, Falsani sat down with an array of people who shape our culture, and in turn, our collective consciousness. She's talked about Jesus with Anne Rice; explored "Playboy theology" with Hugh Hefner; discussed evil with crusading attorney Barry Scheck, and heaven with Senator Barack Obama. Laura Esquivel, basketball star Hakeem Olajuwon, Studs Terkel, guru Iyanla Vanzant, rockers Melissa Etheridge and Annie Lennox, economist Jeffrey Sachs, Pulitzer-winning playwright John Patrick Shanley--all opened up to her.

The resulting interviews, more than twenty-five in all, offer a fresh, occasionally controversial, and always illuminating look at the beliefs that shape our lives. THE GOD FACTOR is a book for the believers, the seekers, as well as the merely curious among us.


From Publishers Weekly Starred Review. Religion reporter Falsani dishes up a whimsical and absorbing collection of interviews with assorted literati and glitterati, dissecting issues of faith, ethics and personal spirituality. Since several of these profiles originated as columns in the Chicago Sun-Times, it is perhaps not surprising that many of the interviewees have a Chicago connection, like radio shock jock Mancow, Smashing Pumpkins lead Billy Corgan and Dusty Baker, the manager of the Cubs. But the questions undertaken are truly universal. Some of the stars evince a fairly traditional stance on faith, including observant Muslim basketball star Hakeem Olajuwon, who prays in Arabic daily and runs all of his businesses according to the anti-interest tenets of Islamic law; novelist Anne Rice, who has recently returned to the Catholic faith and written a novel about Jesus' childhood; or Bush speechwriter and policy wonk Michael Gerson, a committed Protestant who like Falsani is a graduate of Wheaton College in Illinois. Others, like musicians Annie Lennox and Melissa Etheridge, fall into the spiritual-but-not-religious crowd, borrowing creatively from both Eastern and Western religions to craft a personal spiritual practice that works for them. Still others—primarily writers like Studs Terkel, Tom Robbins and Jonathan Safran Foer—place themselves in the agnostic camp. Falsani handles the profiles with sensitivity, painting the book's diverse spiritual seekers with compassion and grace. (Mar. 14)
Copyright © Reed Business Information, a division of Reed Elsevier Inc. All rights reserved.

From Library Journal
In this charming book, Falsani, columnist for the Chicago Sun-Times, interviews more than 25 people of note—politicians, celebrities, writers, and musicians—about their spirituality in an effort to lift the reader's spirit while satisfying a certain guilty delight in gossip; indeed, some hitherto-unrevealed divine secrets of the famous and infamous are as tasty as their first marriages and real names. Who could have predicted that Hugh Hefner would describe himself as "a moral guy"? Or that, according to popular novelist Tom Robbins, we live in hell "because we take ourselves too seriously"? By turns surprising, dismaying, and entertaining, this work is recommended for most collections.

From the Christian Science Monitor
In an absorbing first book - The God Factor: Inside the Spiritual Lives of Public People - she takes the reader along on spirited, often-surprising interviews with more than two dozen creative artists and thought-leaders. The journey becomes engrossing because of the remarkable openness and candor she encounters among the famous, as well as the depth and variety of their beliefs... This sensitive spiritual portrait of popular culture evokes, in thought-provoking fashion, the vibrant and highly individualized nature of contemporary faith.

From the Chicago Tribune
Cathleen Falsani is above all else, an exemplary conversationalist...She is enthusastic, well-read, articulate and open-minded. [In The God Factor,] she sweeps us right along... She has done what only great interviewers have the wisdom and patience to do. She has set the stage and dimmed the lights just so. She has invited us in to the conversation and left us with wonder, confusion, elation and grace.