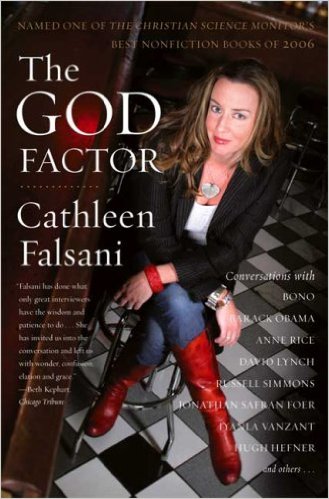 The God Factor: Inside the Spiritual Lives of Public People (Paperback)

“This sensitive spiritual portrait of popular culture evokes, in thought provoking fashion, the vibrant and highly individualized nature of contemporary faith. ” — The Christian Science Monitor
It goes without saying that spirituality now plays an enormous role in the United States. But while this may be a nation of believers, it’s not of one belief, but of many. To shape a candid picture of modern faith, the popular Chicago Sun-Times religion writer Cathleen Falsani—who the Chicago Tribune praised as “above all, an exemplary conversationalist”—sat down with an array of people who shape our culture. She discussed Jesus with Anne Rice; explored “Playboy theology” with Hugh Hefner; talked about evil with crusading attorney Barry Scheck and heaven with Senator Barack Obama. Writers Laura Esquivel and Jonathan Safran Foer, guru Iyanla Vanzant, rocker Melissa Etheridge, economist Jeffrey Sachs, Pulitzer-winning playwright John Patrick Shanley—all opened up to her.

The resulting interviews, more than thirty in all, offer an illuminating look at the beliefs that shape our lives. In the words of one reviewer, Falsani “has done what only great interviewers have the wisdom and patience to do. She has set the stage and dimmed the lights just so. She has invited us into the conversation and left us with wonder, confusion, elation and grace.”