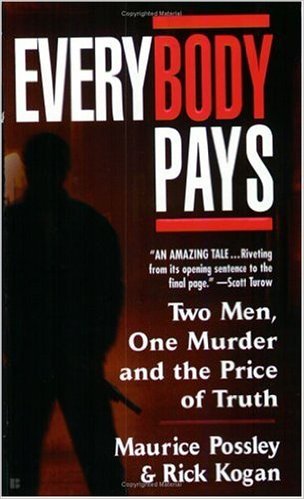 Everybody Pays: Two Men, One Murder, and the Price of Truth (Paperback)


Amazon.com Review When Chicago's deadliest hit man, Harry Aleman, was brought to trial in the late 1970s, not a single one of the city's more than 1,000 mob-related murders had been solved. This time, with a witness willing to testify, prosecutors believed they had a foolproof case. But the mob was difficult to catch for more reasons than one--a strict code of silence, witnesses who turned up dead, and cops and even judges under their control. Bob Lowe, the lone witness to the murder Aleman was tried for, learned this the hard way. Aleman was acquitted the first time around, and wasn't retried (and convicted) until 20 years later. Meanwhile, Lowe and his family were forced to go into hiding not once but twice, and their lives were destroyed. Veteran Chicago Tribune writers Maurice Possley and Rick Kogan have written a searing portrayal of the mob's skewed moral universe, the legal system it corrupted, and a witness-protection system riddled with flaws. In this charged and ultimately redemptive story, only one man emerges a hero. --Lesley Reed --This text refers to an out of print or unavailable edition of this title.

From Publishers Weekly This meat-and-potatoes tale of murder, memory and the Mafia explores facets of Chicago that tourists never see as it delves into a case in which a man is tried twice for the same crime. Veteran Chicago Tribune journalists Possley and Kogan focus on two lives that collided in 1972: Bob Lowe went out to walk his dog and, on the way, witnessed Harry Aleman execute Lowe's neighbor, Billy Logan. Lowe was a quick-tempered blue-collar father; Aleman an ambitious hit man for the Chicago "Outfit" (and nephew of its then-chief, Joseph Ferriola). Aleman was getting back at Logan for harassing his ex-wife, Aleman's cousin, regarding their children. Lowe picked out Aleman's mug shot, but the cops "lost" his ID. Four years later, with local law enforcement embarrassed by a spate of two dozen unsolved Mafia murders, a state's attorney task force indicted Aleman for Logan's murder. Against his father's advice, Lowe testified, only to see Aleman acquitted in a bench trial. This unmoored the already unsteady and disillusioned Lowe; he drifted into substance abuse and petty crime, which resulted in two years in prison. Lowe eventually dried out and reunited with his family, and was jolted when in 1993 he was once again called upon to testify against Aleman, after revelations surfaced about the earlier trial (mobsters paid the judge a $10,000 bribe). Aleman was sentenced in 1997 to 100 years, despite entreaties by family and neighbors, who called Aleman (believed responsible for numerous hits) "a good man... a wonderful, wonderful dear friend." Possley and Kogan's assured, workmanlike narrative offers a dark portrait of how the discretion of Chicago's organized criminals had resulted, by the 1990s, in long-term corruption of police and judges, and many unsolved gangland slayings. This is a thought-provoking tale of urban malfeasance and delayed justice. Agent, Caroline Carney. (Oct. 1)Forecast: Excerpted in the Chicago Tribune and packaged with blurbs from the likes of Scott Turow and Vincent Bugliosi, this should be a hit (so to speak) in Chicago, where Putnam plans a publicity blitz.

--This text refers to an out of print or unavailable edition of this title. From Library Journal Legal commentator and Chicago Tribune reporter Possley and Kogan, a radio host and contributor to Chicago Tribune Sunday Magazine, tell the tale of Bob Lowe, a mechanic whose witness of a murder in 1972 led his life into a downward spiral of drugs, alcohol, and robbery from which it took him 25 years to recover. The sole witness to his neighbor's murder at the hands of a well-known Mafia figure, Lowe na vely thought he would give his statement to the police, perhaps be called to testify as a "protected witness," and thus end his involvement in the case. Lowe failed to heed the words of his father, "This is none of your business. It's just trouble. For you. For your family." He found more trouble than he could have imagined, including crooked cops, a bribed judge, mislaid evidence, and an inept witness protection program. This nightmarish account of a man who could not fathom what he would sacrifice for the truth and of a judicial system willing to bend the truth to entice a star witness to testify is recommended for public and large academic libraries. Karen Evans, Indiana State Univ., Terre Haute
Copyright 2001 Reed Business Information, Inc. --This text refers to an out of print or unavailable edition of this title.

About the Author Maurice Possley is an award-winning investigative criminal-justice reporter for the Chicago Tribune, and has appeared as a legal commentator on NPR, Good Morning America, and Court TV.

Rick Kogan is a senior writer and columnist for the Chicago Tribune's Sunday Magazine, the Emmy Award-winning host of Fox TV's Media Creatures, and the host of the top-rated Sunday morning radio show on WGN. --This text refers to an out of print or unavailable edition of this title.