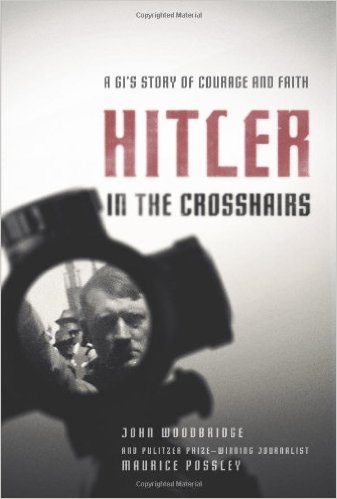 Hitler in the Crosshairs: A GI's Story of Courage and Faith (Hardback)

A Pulitzer Prize-winning journalist teams up with a university scholar in this compelling, untold historical tale of a young man’s courage at a critical time in United States history, and the saga of a dictator’s pistol that continues today. The time is World War II. Young soldier Ira “Teen” Palm and his men burst into a Munich apartment, hoping to capture Adolph Hitler. Instead, they find an empty apartment … and a golden gun. As the authors trace the story of the man and the gun, they examine a time and place that shaped men like Palm and transformed them into heroes. They also follow the strange journey of Hitler’s pistol. Readers will discover: • An imaginative historical adventure in the tradition of Stephen Ambrose’s Band of Brothers (over one million copies sold). • New, previously untold information about World War II events, including an uprising of German soldiers and citizens against the Nazi regime and a never-before told account of an assassination attempt on Hitler in Munich. • Inspiring, motivating, and entertaining storytelling by award-winning authors that will keep the pages turning!

From Publishers Weekly:
When young Ira 'Teen' Palm goes off to fight against Hitler and the invading German armies, he has little to shore up his courage apart from his faith in God and his intense patriotism. Both would play an enormous role in his lengthy career in the armed forces, but they would particularly direct his actions as he fights in a foreign land against a brutal and determined dictator. After the war, Palm's mentor, the Rev. Charles Woodbridge, is the recipient of an unusual gift -- a 'golden pistol given to Hitler by the Walther family' -- taken by Palm as a grisly souvenir of the Fuehrer's armory. John Woodbridge, son of Charles, knows there's a fascinating story to be told. He and Pulitzer Prize-winning journalist Possley (The Brown's Chicken Massacre) lead readers through a tale brimming with exciting accounts of people risking all in the name of God and freedom. Taking us through the wartime challenges Palm and his wife, Helen, face, this fast-paced story reminds us that ordinary people can do extraordinary things, even under great pressure, when fueled by God's amazing grace. (Publishers Weekly)


Review:
As someone who has written a novel that crossed some of the same ground, I found this to be an extraordinary and compelling account of the imagination and bravery that history’s greatest monster, Adolf Hitler, inspired. -- Scott Turow, , Author|“Here’s a captivating tale of valor and devotion---to God, to spouse, to country---woven with newly disclosed details of an attempt to assassinate Adolf Hitler and the circuitous journey of Hitler’s personal pistol. A masterful piece of historical detective work!” -- Lee Strobel, , Author|“Readers of Hitler in the Crosshairs will not be able to put down this page-turning and remarkable story. From the initial chapter until the book’s concluding words, this fascinating account of courage, faith, and heroism is as gripping as it is deeply satisfying. The authors of this marvelous book are to be highly commended.”
-- David S.Dockery, President, Trinity International University

About the Authors:
Maurice Possley is a Pulitzer Prize-winning journalist who is a Research Fellow at the Santa Clara University School of Law’s Northern California Innocence Project. He is the author of two non-fiction books: Everybody Pays: Two Men, One Murder and the Price of Truth and The Brown’s Chicken Massacre.

John Woodbridge (PhD, University of Toulouse, France) is research professor of Church History and History of Christian Thought at Trinity Evangelical Divinity School in Deerfield, Illinois, where he has taught since 1970. He was previously a senior editor of Christianity Today and is the author of Biblical Authority: A Critique of the Rogers/McKim Proposal and coauthor of Letters Along the Way. He is the editor of Great Leaders of the Christian Church and coeditor of works including The Mark of Jesus. Woodbridge is the recipient of four Gold Medallion Awards.